A Principal Ambassador’s View: On the Best Practice Journey

A Principal Ambassador’s View: On the Best Practice Journey
November 18, 2014

In December 2013, the U.S. Department of Education named Jill Levine one of three inaugural Principal Ambassador Fellows. Here, Levine, principal of Normal Park Museum Magnet School in Chattanooga, Tennessee, shares a snapshot of her work at the department.

Last Friday, I met with a couple of principals to plan an event. I scheduled the meeting for late in the afternoon at a Starbucks thinking that it might be a relaxing way to end the week. I took leave from the principalship only four months ago—but how quickly I’ve forgotten the challenges and pressures of the job!

My first mistake was in the selection of the location. From the moment we walked into the Starbucks, the principals were swarmed with kids and parents—current students, former students—all with something to say, a hug to give, or even an offer to buy their coffee. I remembered then that most principals have “celebrity status” when they are in their communities. It was tough to get through the meeting without touching, but constant, greetings from families.

My second mistake was assuming that a late Friday afternoon coffee date would be relaxing for them. Both principals shared how they had scrambled to get everything done to get out of the building by 4:30 p.m. and they would need to return for yet more work before they went home. There was the memo that had to be sent to parents to remind them to follow the car-rider rules, several teacher evaluations that had to be written in order to meet a deadline, a district report that was due that day—the list went on. I was quickly reminded that the job of a principal is simply never done!

As a full time Principal Ambassador Fellow, or Resident Principal, at the U.S. Department of Education this year, I am taking a year off from leading my school (Normal Park Museum Magnet School in Chattanooga, Tennessee). As a Fellow, I help collect the thoughts and ideas of principals from all over the nation in order to help better inform policy at the federal level. I am joined in this work by Rachel Skerritt (principal of Eastern High School in Washington, D.C.) and Sharif El-Mekki (principal at Master Charter School – Shoemaker Campus in Philadelphia). They are both running their schools full time and working part-time as Principal Ambassador Fellows.

In my role at the department, I also have the honor of introducing Arne Duncan to principals and even of taking him to shadow principals for a morning. On visits or in meetings, without exception, we meet incredible educators who are dedicated, hardworking, caring, and inspiring. But these same people often express that they are overworked, isolated, and disempowered. When I ask principals to spend five minutes listing their many roles, the list is endless—principals are mentors, custodians, evaluators, lice detectors, math coaches, parents, testing coordinators, safety officers, and more.

For me, these conversations have cemented the notion that it is principals who are the key to carrying out positive change and improvements in our nation’s schools. It is principals who either recruit and retain the best teachers with their great leadership and support, or (conversely) can chase off great teachers by failing to create supportive environments. This is especially true in the most challenging school environments. The more challenging the circumstance, the more great leadership matters.

So, I am on a year-long journey to find best practices. I am looking for districts that are finding ways to better recruit, train, and support these very important educators. I am seeking places and programs that have found ways to provide principals with ongoing support. And, I am hoping that I just might find a district that has focused on making the job of principals just a bit more manageable!

I look forward to highlighting all that I learn as the year goes on. Should my journey this year cross with yours, know that I will show up at your school with coffee (and chocolate) in hand! 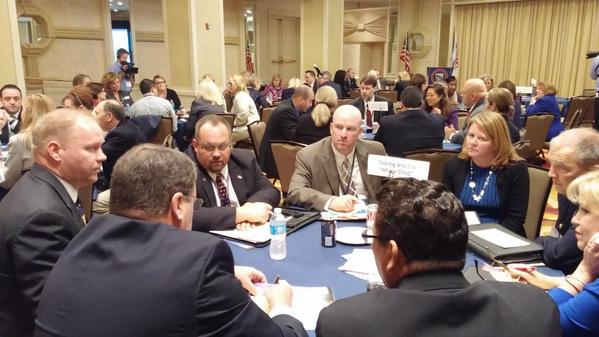 Jill Levine (pictured above meeting with 2014 National Distinguished Principals) is the Resident Principal at the U.S. Department of Education. Reach out to her at jill.levine@ed.gov or follow her on Twitter at @chattajill.

Tales From a First-Year Principal